The Grand Hotel Duchi d’Aosta, built in 1873, stands on an area with an ancient history and a vocation that is just as remote: the management of public eating establishments and hotels.
It all begins in 1300 with the Hospitium Magnum, a private hotel with stables, adjacent to the inn, Osteria del Dazio.
In the 17th century, the hotel’s illustrious guests included Archduchess Maria Maddalena of Austria married to Cosimo de’ Medici Grand Duke of Tuscany (1608), Infanta Maria of Spain married to Ferdinando I (1631), and Federico Gonzaga Duke of Mantua (1662). In 1727, on the area of these two establishments, the Municipality had the Osteria Grande built at its own expense. In 1765, it was restored and raised (“because there was the prospect that some prince might be coming”), and renamed Locanda Grande. In fact, it hosted famous, high-ranking and aristocratic people such as Admiral Horace Nelson, Lady Hamilton, Queen Maria Carolina of Naples, the archaeologist Johann Joachim Winckelmann, the emperors Joseph II and Leopold II, Giacomo Casanova, Carlo Goldoni, Gioacchino Murat and Prince Bernadotte.

But with the fervour of the construction boom that pervaded the city from the first half of the 19th century, change was inevitable for the then Piazza Grande (now Piazza Unità d’Italia); in particular, in 1847, they decided to tear down the Locanda Grande, creating a void that remained unfilled until 1872. 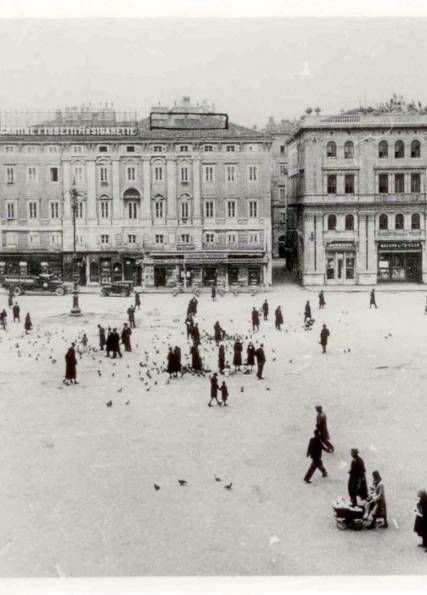 It seems that the desire to erase the memory of a tragic event that occurred there in 1768 played a part in this decision: the murder of the archaeologist Winckelmann by a certain Francesco Arcangeli, a sailor from Pistoia.
However, that void so “deeply deplored” by the city authorities led the Assicurazioni Generali, co- owners of the area, to appoint the engineers Eugenio Geiringer and Giovanni Righetti for the construction of a new hotel, completed in 1873 and named Hotel Garni, celebrated for “elegance, cleanliness of its interiors, excellent service and reasonable prices”. The eclectic facade, which has remained unchanged since then but returned to its original splendour during the very recent restorations, is decoratedwith Corinthian pilasters, floral friezes and, at the top, a balustrade with columns (the construction date is indicated in the central part) surmounted by two statues, one depicting Trieste, the other Mercury, god of commerce. In 1908, its name was changed again to Hotel Vanoli, a brand that it maintained until 1973, the year that its ownership and management changed. It was finally given the name of Grand Hotel Duchi d’Aosta.
The hotel still retains an unmistakable Central European style today, and this makes it unique, elegant, sophisticated and familiar at the same time.

Text by the Trieste Rotary Club